Wow… this year really seems to be flying by! As we near October I realise how much I have missed blogging. The past few months have been unusually busy and I am happy to be able to catch my breath for a while- (and as I type this, out of the corner of my eye I notice three piles of books that still need to see my red pen in the next week). In between teaching and mothering I could only hope for some time to catch up with my readers…

I had an experience a few weeks ago that I wanted to share with you, another one of those ‘universal-mummy-moments’. I decided to take my boys to a ‘Children’s Fun Day’ at a local pre-school in Hoedspruit. There were stalls specifically for the little ones which was a change from the usual adult aimed markets that we normally attend. After completing the Actionball obstacle course and some helium-filled balloon shopping, we eyed the jumping castle but decided against it as it was already occupied by the older (slightly rowdy) children. We opted instead for some face painting.

As I placed them in the waiting line I caught sight of an old friend of mine who had recently had her second son. I showed my boys where I would be in case they needed me. I looked back every so often ensuring they were still were I’d left them. After some time my 6 year old came to me requesting a change in his balloon animal of choice, and since the stall was a few metres away I watched him go over and exchange his dinosaur for a chicken and run back to the face painting station. I must have looked away for approximately 30 seconds but when I looked back … both boys were GONE!

I stood up to get a better look and still could not see them. I excused myself from the conversation I was having and briskly walked to the face painting area… they were nowhere in sight. 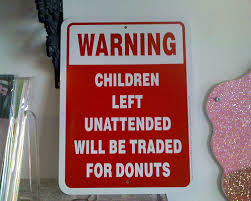 Now, every single mother in the world can relate to what followed.

Panic began to set in and I began racing around the area trying to locate them while attempting not to start hysterically shouting out their names. I ran to the exit and checked with the people there ensuring they had not left the school property. They assured me that children would not be allowed out without an adult. I cannot begin to tell you the millions of thoughts that raced through my head.
I ran passed a friend of mine who is about 8 months pregnant and upon seeing my panic-stricken face, offered to help me search by covering another part of the area. I immediately checked the food stalls as I thought they may have been enticed by all the varieties of sweets on offer (they are children after all). In between all of this I remember thinking to myself “Oh gosh! How am I going to explain losing BOTH my children… I mean people have lost one child in gatherings! But I must be the first to lose TWO in one go! What the heck am I going to do?? It is now confirmed- I am a bad mother!!”

I stood at a central point in constant 360 degree turns scanning the crowd for little dinosaur hats they had been wearing. I rationalised with myself saying that Isa (6 years old) was a responsible child, who would not simply wander off into danger and told myself repeatedly (and unsuccessfully) to calm down!

Out of the corner of my eye, I found my friend waving over to me pointing down at 2 blue dinosaur hats and almost burst into tears, overcome by relief! It seems my older son had raced over to the face painting station to fetch his little brother to watch the snake demonstration. The SNAKE demonstration!! Of course!! How obvious it seemed now…typical boys!! The minutes I spent racing around in search of them seemed to be the longest of my life and it took me some time to recover from the shakes.

I’m wondering whether this is possibly genetic… my dad did lose me on a trip to the bank when I was 3 years old… according to him though- I lost him! I now understand my mother’s horror when returned without me to organise a search party. This was a different time though, and a kind gentleman picked me up and took me to the local (Ladysmith-KZN) Police Station where I proudly stated my name … incorrectly…Maryam Bibi Moola (it was Osman, but as a joke, my uncle fondly teased me saying I was a Moola and so of course that was the name I repeated). Fortunately the police woman, who undertook the task of finding my parents, was met by my family on their way to the police station, and I was reunited with my parents.

It took me a day or so before I related my ‘losing the children’ incident to my husband who casually laughed and said that he knew I was a panic mechanic… I did have the last laugh though when a week later he experienced a similar level of anxiety when he ‘lost’ my 4 year old while collecting a KFC order. Needless to say, he was found, but I think my husband views my ‘panic mechanic mentality’ with a little more sympathy.

On a recent visit to Durban we visited a popular butchery and deli to stock up on some of their delicious products for our stay.  As we shopped around I found my 4 year old staring intently at the sheep carcasses in the above picture.  After some time he pointed to them and asked in a rather loud voice,” Mummy, what kind of chicken is this?”  I laughed and said,” Hamz its not chicken darling, it is actually a sheep.”

I continued shopping and after a few moments heard him shout after me,” Ohhhhh….it’s sheep-chicken!”

The other shoppers, my family and I had to grin at his understanding of what he was looking at.  You see the skin on his face and body…that’s chicken… the chops he eats at our weekend braai’s …that’s chicken too.

There’s still so much for him to learn, and boy are we going to have fun watching him as he does! 😀